Shaggy: Can you give us a straight answer?
Mr. E: Where's the fun in that?
Scooby-Doo! Mystery Incorporated 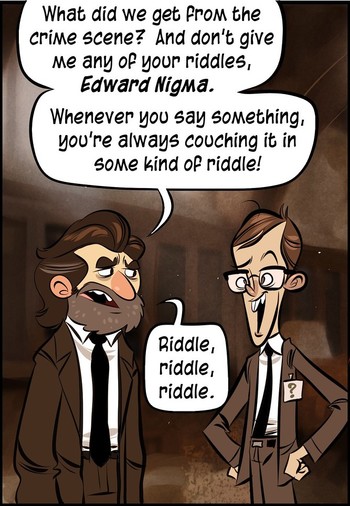 There are many reasons why characters may puzzle others by speaking in riddles. Sometimes it may be a test for the protagonist to figure out the meaning. Or they have to employ a code to keep the meaning hidden from strangers. In other cases, they simply cannot express their thoughts properly due to being mentally unhinged... And finally, there is the simplest reason: they may be doing it for fun, as an unusual form of amusement.

Very many mentors, sages and oracles can be suspected of this due to their cryptic speech mannerisms, though they would rarely admit to it. This motive often overlaps with the others listed above: for example, Koans may serve both as a way of amusement for the mentor and as a challenge for the disciple. Eccentric Mentors and Trickster Mentors are especially prone to this; beautiful females and Love Interests can also have such inclinations, since mysteries and riddles are often the best way to intrigue the hero. As a result, a love interest who doubles as a mentor would almost inevitably indulge in this.

Compare Teasing from Behind the Language Barrier, when a foreign language is used for the same purpose, and Loves Secrecy, when a character delights in keeping secrets from others. Subtrope of It Amused Me; may overlap with Proverbial Wisdom.