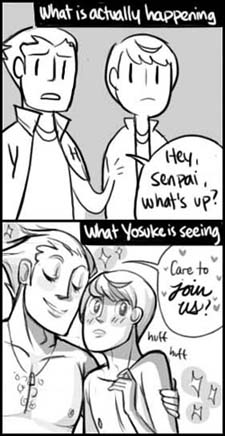 This doesn't go unnoticed.
"Really the best thing about the smirk is that it demonstrates that literally a single pixel can serve as shipping fuel. It was worth it for that scientific demonstration alone."
— Andrew Hussie, on this panel of

Shipping Goggles is when a viewer interprets the smallest, most ambiguous canonical evidence in favor of their ship of choice, even if said "evidence" is insignificant relative to other evidence, or outright nonexistent. Maybe that glance lasted just a little too long, or that remark in that conversation could be interpreted as innuendo. The ship in question can range from one that seems entirely plausible but doesn't yet have clear canon evidence, right up to a Crack Pairing between characters who are bitter enemies, live in different universes, have never met, or whose sexuality/circumstances makes any relationship between them extremely unlikely. Reasons for putting on Shipping Goggles vary; wishful thinking, to defend the ship against other competing ships, or Just For Fun.

Many shippers would admit to doing this to some extent; having your own interpretation of Canon is part of the fun of Shipping. However, it can become Fan Dumb when people try to force their ships on others. And when such fans are Running the Asylum, things can get messy.

Merely being an implausible pairing doesn't automatically mean that Shipping Goggles are in play, as often a ship's supporters will admit that their support for a particular pairing has nothing to do with the source material. The goggles are used to reinterpret canon events in was to promote or discourage character couples. While this usually goes hand-in-hand with goggles in favor of the fan's couple of choice, occasionally it is just simply aimed against a couple in general. Caution should be used not to confuse every case of LGBT Fanbase Gaydar as Shipping Goggles — if fans believe a character is gay, it is not necessarily because fans want to ship them.

A subtrope of Epileptic Trees. Creators aware of their fans' Shipping Goggles can play to it with a Ship Tease; this can be interpreted as Fanservice or just cruelty in suggesting a relationship that isn't going to materialize. Sometimes, the shipper turns out to be right. Other times... Examples of character shipping belong on one of the other Shipping Tropes pages, like Crack Pairing.

Has nothing to do whatsoever with the Dai Sentai Goggle Five (shipping them to each other, however, would be an example). Nor is it necessarily about shipping Goggles.