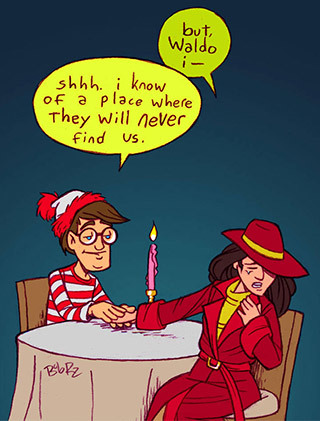 .
As any shipper knows, continuity is no barrier for The Power of Love. The logical extreme of this is Intercontinuity Crossover Fan Work.
Advertisement:

As a general rule, this is much more light-hearted and less Serious Business than intra-continuity shipping, favoring the Rule of Funny instead of an unironic OTP. These ships are usually labeled as Crack Pairings, but it's not impossible to make some of them seem like they can actually work, depending on various factors.

When you factor in Non Linear Sequels like the Final Fantasy series that have multiple continuities, series with a multiverse and even official Massive Multiplayer Crossover franchises like Super Smash Bros. and Kingdom Hearts, it all turns into Schrodinger's Ship, as it becomes simultaneously impossible and canon-friendly.

Theme Pairing holds a lot of Crossover Ships. Common Crossover may relate. Series where preferred relationships are not possible or unlikely due to Situational Sexuality requires branching out of that Verse. Crossover Couple is for when this appears in semi-canon, canon, and licensed material, as well as specific fan-works.