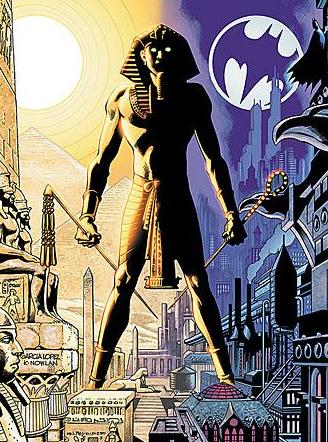 When people say the word "Egyptian" in popular culture, what pops into mind?

The Pyramids? Cleopatra? Animal-headed gods? Mummies? The Eye Of Horus?

All of these answers refer to the the ancient civilization of Kemet, and overlook its more modern cultures; for example, Egypt has been Islamicized for over 1200 years and before that was a Christian nation with a Hellenistic (Greekified) culture. For reference, England adopted Christianity at roughly the same time as the Arab conquests of Egypt, and that's twice the amount of time that Christianity has existed in the Americas. At present, over ninety percent of the Egyptian populace is some form of Muslim.note And the remaining 10% are typically some denomination of Christian. Egypt has undergone numerous radical changes since its Ancient period and was ruled by many foreign powers, yet, in fiction, it seems as none of these influences from the last two millennia ever touched the country at all.

A Western variation of this would be associating Greece with its ancient roots as if they still worship the pagan Olympian pantheon, in spite of the nation being Orthodox Christian today and having been a part of an Islamic empire for centuries.

Most commonly, Egypt exists in a form of pop cultural stasis where the wardrobe, themes, or even religion of Ancient Egypt are all anyone knows about it. In a Five-Token Band, or a cast full of National Stereotypes, the character with the gimmick of "Egyptian" has those attributes as their most prominent character trait. In other cases, the character is "modern", but still has no influences from Arab culture (or that of any prominent ethnic group, such as the Copts). Any references to these modern cultures are either severely downplayed or totally non-existent. Characters will usually not even speak Egyptian Arabic (nor Coptic which is actually the modern day descendant of the Egyptian language) but pepper their speech with Ancient Egyptian phrases.

The only thing that is considered "modern" is the music, either using "The Streets of Cairo

" in the case of older media, or with riffs that consist of ouds, qanun zithers, and ney flutes; instruments that wouldn't have existed in ancient Egypt. (Though since nothing is ever straightforward, the ancient Egyptians probably did have a flute rather like the ney, and they also had a form of lyre similar to the modern Egyptian simisimiyya

, and they seem to have had drums not too far off from the modern Egyptian tabla

This trope is NOT when one character in a plentiful cast of Egyptians happens to utilize an Ancient Egypt gimmick. It's also NOT for when the story actually takes place in Ancient Egypt. It's for when Arabization, Islam, Christianity, the Ottoman and British conquests—or any other one of the many important parts of modern Egypt's cultural identity—is absent from portrayals of the modern population in whole or part, or when the sole "Token Egyptian" character has very few of those influences. If the character is a Fish out of Temporal Water, lack of such influences is a given, so the character must be one of the few (if not the only) "Token Egyptians".