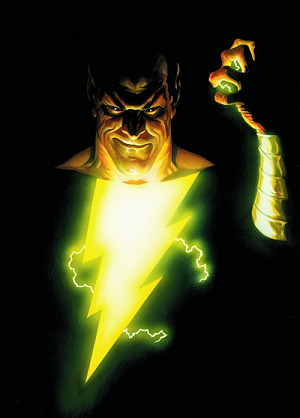 Black Adam/Teth-Adam is a comic book character. He first appeared in Marvel Family #1 (December, 1945), created by writer Otto Binder and artist Clarence Charles "C.C." Beck. He was at first a one-shot character, but was revived in Shazam! #28 (March, 1977) and has had semi-regular appearances ever since. Adam was originally the archnemesis for Captain Marvel/Shazam, and the Marvel Family, but was later portrayed more as an antihero.
Advertisement:

His backstory is relatively simple: Born millennia ago, he was given immense magical power by the wizard Shazam, becoming the original Earth's Mightiest Mortal in ancient Kahndaq (a fictional Ancient Egypt-like country). Unfortunately, he became drunk with his own power after the death of his family, and Mighty Adam (as he's called) rebelled. Shazam had him banished to another dimension. In the 20th century, Captain Marvel was appointed the new champion of Shazam to battle Adam. Bonding with Theo Adam, a modern archaeologist's aide, Black Adam comes back as a ruthless animal who killed Captain Marvel's parents years ago when he first returned.

Adam is something of an alternate company equivalent to Namor the Sub-Mariner, the Marvel Universe's own super strong, pointy eared, black hair slick backed, anti-hero flyer. Both are also Golden Age characters, and both have been members of their World War II equivalent teams, The Invaders Comic Book and JSA. Adam was originally published in Fawcett Comics stories, before the company closed and DC bought the characters.

The character is set to appear in his own upcoming movie in the DC Extended Universe, portrayed by Dwayne "The Rock" Johnson (who's been set to play him for a very long time), guest-starring the JSA. SHAZAM! most likely alludes to him when the wizard talks about the ancient champion who became drunk on his powers and turned evil.