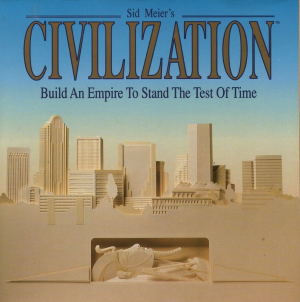 Civilization is a popular "4X" Long Runner game series. The original game was developed in 1991 by Sid Meier, and there have been five direct sequels as of October 21, 2016, numerous expansion packs, and many spin-offs (Sid Meier's Alpha Centauri, Colonization, Civilization: Call to Power, Civilization: Beyond Earth), as well as the much simplified Civilization Revolution for home consoles, the Nintendo DS and iPhone, Civ World for Facebook, and the MMO Civilization Online. The game was originally inspired by a Board Game, and has since spawned two others. Many polls and lists of the best computer games ever developed have, at various times, listed several of the games in the series, often at #1.

It is (in)famous for leading to gameplay sessions that extend well past the player's original self-imposed deadline, so much so that a joke "Civilization Anonymous" website was made.

("Our Father" in Swahili), the menu music from Civilization IV,note Technically, the re-arrangement of the piece for the album "Calling All Dawns." became the first song from a video game to ever win a Grammy Award, which hopefully will spur the Grammy Awards into including an award for "interactive fiction" music scores and songs.