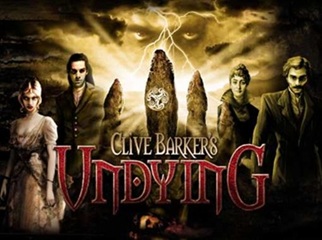 "Can you hear the whispers, Jeremiah? Even another continent isn't far enough. Remember, I tried to go as well. I still heard them, even in Asian dens and German gutters. I figured it out, it's inside ... It won't be long until you cross the threshold, brother."
—Aaron Covenant.
Advertisement:

Set in the 1920s, Patrick Galloway is a paranormal investigator who has been exiled from his native Ireland for unknown reasons. He receives a letter from an old war buddy, Jeremiah Covenant, who saved his life during the First World War. The Covenant estate has been terrorized by frightening and deadly paranormal events, caused by a family curse that claimed the rest of his siblings, and Jeremiah's ailing health makes him helpless to stop it. Owing a life debt to his old friend, Patrick breaks his exile and returns to Ireland.

Except ... the Covenant siblings aren't quite dead, and they're not happy about Patrick sticking his nose into "family affairs." The Covenant siblings were cursed many years ago when they childishly performed an ancient occult ritual at the nearby Standing Stones, dooming them to madness and death only to be resurrected as nightmarish abominations. Now they seek to awaken the evil being known as the Undying King so he can reclaim his dominion over the earth.

But the awakening of such occult forces has also drawn Patrick's nemesis, Otto Keisinger, who wants to use the Covenant estate for his own ends. Before Patrick can end the terrors of the Undying curse, he's going to have to square off with Keisinger once and for all.