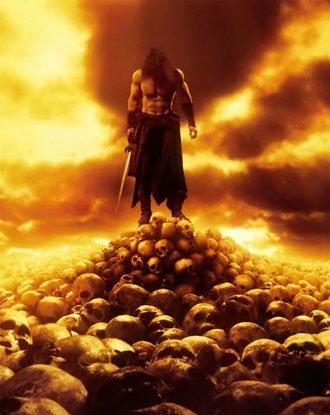 Skulls for the skull throne.
DM: Suddenly, a great rumbling shakes the caverns. The walls crack open, and thousands of skulls are released! [...]
Aragorn: Skulls? Like, only skulls?
DM: Yeah.
Aragorn: But that makes no sense!
DM: It's just a trap! Dungeons have them all the time.
Aragorn: I'm not calling the device into question. I'm questioning the payload. Thousands and thousands of skulls? How does that work, exactly? Was this a race of floating heads?
— DM of the Rings
Advertisement:

Piles of bones composed of... well... nothing but skulls. The rest of the bones vanish without explanation. It doesn't matter whether the victims were killed by ancient death traps, man-eating monsters or barbarian hordes; nothing remains but the skull.

There are good narrative and practical reasons for this. A human skull is instantly recognizable, making it a powerful symbol of death. Other bones do not carry the same emotive weight; few people could identify a human kneecap on sight, let alone associate it with atrocities.

It helps too that skulls stack up so neatly. Or perhaps it's the fact that skulls represent a one-to-one ratio of bones to corpses, giving an instant clue on how many lives must have (been) ended to produce this. While a given human has multiple of the majority of other bones (and the most visible exception, the spine, takes up a lot more room per victim). It's also what you're left with when you take heads as trophies and leave the rest on the battlefield.

Whatever the case, when warlords and writers want to evoke terror, they create gargantuan piles of Nothing But Skulls. And stand on them. It's an old trope, but still effective.

Skeletons in the Coat Closet is for when skulls and other bones are used as accessories and on clothing. Beware the Skull Base refers to when skulls and skeletal aesthetics contribute to the design of a sinister location, whether it be a natural skull or an artificial one. For skulls (usually animal ones) that are mostly seen alone, without the rest of the skeleton or other skulls, see Desert Skull.

After reading this page, skull will no longer sound like a word.