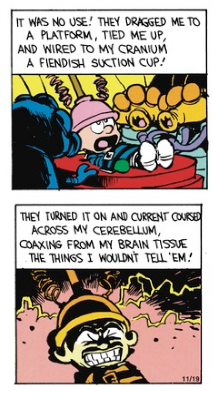 Darth Maul: Now there are some things I need to know. And you’re going to help me.
Jesse: We can go round and round in this circle if you want. I ain’t telling you anything!
Darth Maul: It is not up to you. Your mind will speak. Or it will break!
— Star Wars: The Clone Wars, "The Phantom Apprentice"
Advertisement:

One of the characters is captured and restrained. If they have information that the Big Bad wants, or if their captors are just feeling a bit sadistic, the bad guys will break out the Mind Probe.

This device may cause a) a lot of fancy flashing lights and electronic effects, b) frightening hallucinations for the captured hero, or c) both. These devices frequently have varying levels of intensity; inevitably, the hero has to suffer the highest one. Confusing and terrifying flashbacks and nightmares are often a long-term result of the Probe, especially if the hero is being made to pay for past transgressions.

While not actually touching the character in any way, when turned on, their subjects will convulse in agony. Sometimes they actually result in usable information. If the character has Telepathy, they can initiate this without the device. A telepath might try to protect themselves with a Psychic Block Defense.

Named for a device in Doctor Who, where similar things were used several times.

See also the Mental Picture Projector and Virtual Reality Interrogation. For a slightly different approach, there's the Agony Beam, which doesn't get into a person's mind directly — it's just a good way to convince a person to tell you what you want to know.

Not to be confused with Mind Screw.