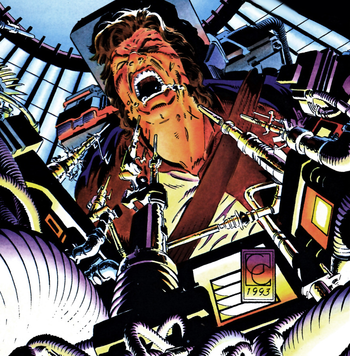 Evil Empires can't just slouch around on a throne all day, they have Muggles to oppress and Doomed Hometowns to raze! So not every Evil Overlord can take the time out of their busy schedule to personally interrogate a captive (which, let's face it, is the only surefire way to get them to break). So instead they will delegate the use of Cold-Blooded Torture... to something without the blood. The Robotic Torture Device is a torture device with various bits of torture equipment, including but not limited to: knives, poison filled syringes, blades, electric shock prods, Agony Beams, or worst of all, feathers.
Advertisement:

The robot itself may require the victim be Strapped to an Operating Table beforehand, or may incorporate a Shackle Seat Trap to immobilize them itself. It can be programmed to torture captives, or it might just be a swiss army knife for a Torture Technician. For extra Nightmare Fuel, the torture implements will be on arms that hack and stab blindly, with the promise of mauling the victim indiscriminately and never tiring.

Depending on how you want to look at it, it either makes the torture more or less dehumanizing by having a cold and unfeeling robot administer it. At least, we hope it's cold and unfeeling, because otherwise it could get much, much worse.

Expect The Dragon or Torture Technician to coldly intone "We Have Ways of Making You Talk" as it slowly draws near the victim before The Cavalry arrives... or not, which results in a fate that makes falling into a wood chipper seem tame.

Augustine plugged and played Eugene as if he was a game console.

Augustine plugged and played Eugene as if he was a game console.