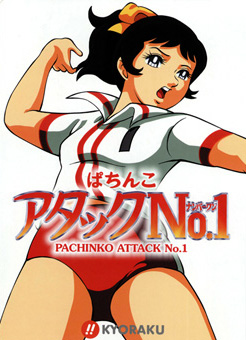 Girls can play sports too!
Advertisement:

Attack No. 1 (アタックNo.1, Atakku Nanbā Wan) is an early shoujo manga and anime series, with the anime being notable as the first televised sports anime aimed at a female audience. The manga was created by Chikako Urano and ran in Margaret from 1968 to 1970, and the anime first aired in late 1969 and ran through 1971. First meant to capitalize on the success of the 1964 Olympic volleyball team, it ended up bringing more mature fans to the shoujo demographic, compared to Sally the Witch's success in that time.

The story is centered on Kozue Ayuhara, who transfers to Fujimi college and impresses the volleyball coach when she tries out. After making friends and enemies, the story highlights her struggles and triumphs as she matures and tries her hardest to become the best volleyball player in the school, Japan and the world.

It inspired the series Attacker You! and Attack on Tomorrow, made several years later by a different animation studio but featuring several of the same staff. Even in 2006, it still ranked #9 out of 100 in the list of celebrities' favorite anime. It has a great number of fans in Europe, particularly in Germany, where it was shown as Mila Superstar (with Kozue being renamed Mila), Italy as Mimì e la nazionale di pallavolo (with Kozue renamed Mimì) and Spain as La panda de Julia (again, with Kozue renamed Julia).

In 2005 a live-action drama was made based on the series.