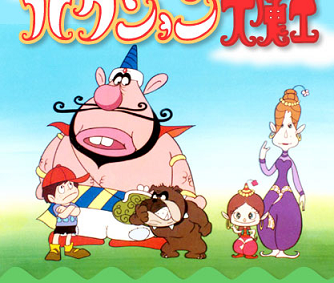 Hakushon Daimaō (loosely translated as "Achoo the Demon King", also known as The Genie Family) is a comedy anime made by Tatsunoko Production (known outside Japan primarily for Speed Racer). It ran from October 5, 1969, to September 27, 1970, on Fuji TV, was directed by Speed Racer veteran Hiroshi Sasagawa, and lasted 52 episodes.

It tells the story of a 20th-century Japanese boy named Kan who finds an ancient bottle that contains three genies (the titular Hakushon Daimaō and his daughter Akubi) who are brought out and grant wishes whenever somebody sneezes or yawns nearby. Unfortunately, Mao is clumsy, and is often combined with Kan-chan's occasional selfishness as well as Akubi's tendency to cause mischief. As a result, Hilarity Ensues.

It got an English dub by Saban called Bob in a Bottle, but unfortunately it never caught on, and this series is now incredibly obscure in the U.S., although it aired in Canada on YTV during the 1990s. It's still very popular in Japan, Mexico and Europe though. Another English dub called The Sneezing Magician was made for Cartoon Network's Asian feed in the late 90s.

The main character appeared in the Japanese version of Tatsunoko vs. Capcom, but unfortunately, he had to be removed from the international version due to licensing issues.

As further proof of the show's enduring popularity in Japan, Akubi later got two TV spinoffs of her own in the 2000s. She was also able to get the spotlight in a 2019 crossover movie with Monster Strike, titled Pandora and Akubi. There she gets to travel with that game's Medusa as they go through the desert, with a host of other Tatsunoko and Monster Strike characters along for the ride.

It was later confirmed that there will be a new show airing in 2020, celebrating the original show's 50th anniversary. Plotwise, it also takes place 50 years after the original, with the genies finding themselves with Kantaro, the grandson of Kan. VIZ Media has picked the license up and it'll stream on Crunchyroll.