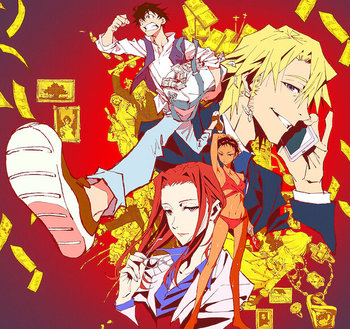 Oh yes, I'm the great pretender, / Just laughing and gay like a clown. / I seem to be what I'm not, you see, / I'm wearing my heart like a crown...
Great Pretender is a a 23 episode original anime from WIT Studio, directed by Hiro Kaburagi and written by Ryōta Kosawa. The character designs are by Yoshiyuki Sadamoto of Neon Genesis Evangelion fame.
Advertisement:

Young con man Makoto Edamura calls himself "Japan's greatest swindler," but in reality, he's still got a lot to learn about conning. One day, he attempts to pickpocket what he assumes to be a guillible French tourist. But that "tourist" is actually Laurent Thierry, confidence man par excellence, who specializes in conning rich and horrible people out of their money. And rather than taking offense, he decides to take Makoto under his wing. Nicknaming Makoto "Edamame," Laurent drags his new, not-entirely-willing protégé into the world of high-stakes confidence games against powerful and immoral people. With the help of Laurent's muscle-woman Abigail Jones, the group embarks on globetrotting escapades as they seek to con the world's worst.

The show was picked by Netflix for international distribution, and they released the first 14 episodes worldwide on August 20, 2020, with the remaining 9 episodes dropping on November 25, 2020. In March of 2021, it was announced that the series would have a stage play adaptation in Japan

Tropes appearing in Great Pretender include: