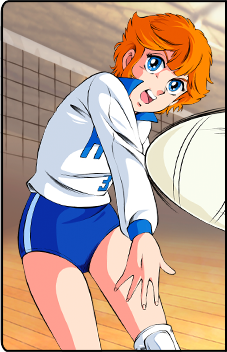 Attacker You! is one of the earlier sports anime and Spiritual Successor to Attack No. 1 and is equally centered around a female volleyball team.

You Hazuki is a feisty and insistent Passionate Sports Girl, specialized in volleyball, who comes to Tokyo to live with her father and her adoptive brother, Sunny. She gets trained by the abusive and tough as nails coach of the feminine team, Daimon. Despite her rocky debut, she soon becomes one of the top players of her team and gets the attention of the media and many high-ranking national coaches. Her biggest wish is to become part of the National Team and compete in the Olympic Games of Seoul.

Along the way, You meets Nami Hayase, a co-player with whom she forms a lasting friendship. She also meets Eri Takigawa, her arch-rival with whom she has a Worthy Opponent / Friendly Rivalry thing going on. In addition, she's trying to get the attention of Sho Tachiki, the head player of the masculine team, on whom she has an enormous crush and who is also the object of Nami's affections.

Inspired by Attack No. 1, the show is typical of the 80's sports animes such as Captain Tsubasa and, true to its nature, it garnered its main success in Europe, especially France, Italy, and Spain. Even though it is considered a classic in its native Japan, its fame up there is nowhere near as big as it is in the aforementioned countries. The Italian dub even decided to connect it to Attack Number One and stated both series' main leads were blood cousins. This alteration to the storyline carried over into the French and Spanish dubbed versions of the anime and caused confusion to spectators from countries where this version was distributed and the other was not.

The anime was produced by none other than Knack Productions of Chargeman Ken! infamy, becoming by virtue of the show's success in Europe its biggest international success. While the animation in some episodes approaches Chargeman Ken! awfulness, it's quite good in many others. Shiro Sagisu, later Studio Gainax and Hideaki Anno's go-to composer, provided the musical score.

In 2008, a sequel named New Attacker You was realized 24 years after the first airing. It has some of the old show's main characters (You, Eri, Nami, Sho, coach Daimon, and coach Mitamura), but all of them (even You) were left largely Out of Focus in favor of the new cast and given totally different personalities (especially You), to the point of being a sequel In Name Only.

Attacker You! provides examples of:

The 2008 sequel provides examples of: