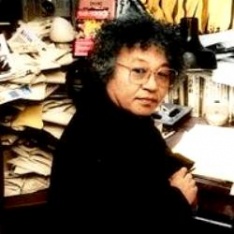 Shotaro Ishinomori, born Shotaro Onodera, (January 25, 1938 – January 28, 1998) was one of the most influential men in Japanese entertainment, being dubbed "the King of Manga" and held the title in drawing more comic pages than any other manga author. In his youth he was the president of a manga study group and got his first big break working as an assistant to Osamu Tezuka himself (who famously remarked that Ishinomori, then going by the name Onodera, resembled a talking potato) on the Denkou The Invisible Robot story in Astro Boy. On the manga and anime side, he created Cyborg 009, which was one of the first animated super-teams.

But more famously in the west, he created Kamen Rider, one of the major live-action Tokusatsu franchises. KR was based on Ishinomori's Skull Man manga, which is now currently being remade by his protege, Kazuhiko Shimamoto, who was specifically commissioned to do so. He also created Himitsu Sentai Gorenger, launching the Super Sentai franchise, which stands alongside Kamen Rider as a major live-action Toku franchise, though he had little to do with it after J.A.K.Q. Dengekitainote In fact, Goranger and JAKQ were merely considered spiritual predecessors to Super Sentai for a long time instead of actual installments.

Due to the large number of superheroes he created, many of them were much grimmer and more "realistic" than what the competition was putting out at the time while still retaining an endearing sense of over-the-top garishness, he is often considered to be the Japanese equivalent of Stan Lee.

Also, he was known as "Ishimori" until 1986, supposedly due to a misprint that stuck.

Commmon Tropes in his works: