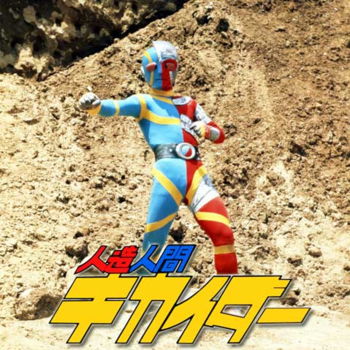 Android Kikaider (人造人間キカイダー, Jinzō Ningen Kikaider) was originally a 1972 Japanese tokusatsu live-action series that aired alongside a tie-in manga version, both created by Shotaro Ishinomori. The tokusatsu was a huge hit and a classic among superhero media.

The basic story follows Jiro, a robot who was built by Doctor Komyoji in order to stop DARK and Professor Gill from achieving world domination. What will enable Jiro to do so is GEMINI, a special conscience circuit designed to help Jiro distinguish between good and bad and thus ignore the evil orders of Professor Gill. However, GEMINI was left incomplete due to Professor Gill catching wind of Doctor Komyoji's intentions and taking him prisoner. Jiro meets the doctor's daughter, and the two of them, along with a private detective, his assistant, and Mitsuko's little brother, set out to find the Doc and attempt to fix Jiro's broken conscience circuit. Professor Gill sends out his robot minions to try and thwart them, but Jiro is able to change into his high-powered alter-ego Kikaider and stop them.

The tokusatsu series was followed by Kikaider 01, which focuses on a new Kikaider model of the same name who goes under the civilian identity of Ichiro. An animated version was produced in 2001 in a rather retro art style quite similar to that of the manga. The overall plot of the animation was also much closer to that of the manga than the plot of the live-action series was, which took many liberties with the story and was slightly more Monster of the Week type story. An OVA version of Kikaider 01 was also produced which serves as a sequel to the first anime series, but despite the title, focuses more on Jiro than Ichiro. A spinoff movie titled Mechanical Violator Hakaider was made, which recasts Kikaider's rival as an Anti-Hero. The Darker and Edgier Kikaider Code 02 manga began publishing in 2000.

A film remake, Kikaider REBOOT, was released in May 2014. Similar to Gavan and Go-Busters, Kikaider had a crossover with Gaim to promote the movie.

The TV anime series and the OVA aired on Adult Swim in 2003.

Now it has a character sheet under construction.

Waruder has SHADOW's "Shadow Replicator" device used on him. As Waruder is a samurai mercenary with a code of honor, the newly created "Waruder Shadow" is his opposite as an erratic warrior with no concept of morality who switches between doing good and evil acts.

Waruder has SHADOW's "Shadow Replicator" device used on him. As Waruder is a samurai mercenary with a code of honor, the newly created "Waruder Shadow" is his opposite as an erratic warrior with no concept of morality who switches between doing good and evil acts.