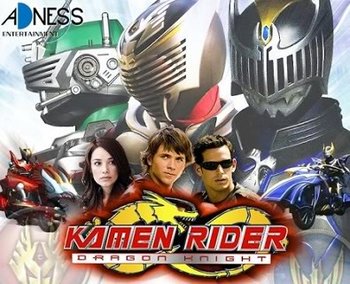 The second attempt at adapting Kamen Rider for western audiences, after Saban's Masked Rider. Based on Kamen Rider Ryuki, chosen for its large number of Riders, including a woman.

Kit Taylor's life has been rough; in the year since his dad vanished, he's been moved into foster care and gained an unwarranted reputation as a troubled youth. But recently it's gotten weird: his dad has begun to appear in strange visions, telling him things like "don't be afraid of the dragon". Moving back into his old apartment, he finds a deck of strange cards, and he then begins to see things in mirrors including, sure enough, a dragon that seems to be following him around. Throw into the mix a biker who wants his card deck and won't take "no" for an answer. But when the biker gets into trouble, Kit follows his dad's advice and makes a contract with the dragon, becoming Kamen Rider Dragon Knight.

Afterwards, Kit's able to get the story out of the biker, named Len and a Kamen Rider in his own right: there's a world on the other side of our mirrors called Ventara. This world was invaded by an alien named General Xaviax, and they created the twelve Kamen Riders to defend themselves. However, one of the Riders betrayed them and Xaviax took over, stealing their Advent Decks (the source of their power). Now Xaviax has set his sights on Earth, searching for our universe's counterparts to the original Riders and manipulating them to do his bidding, while Len is trying to get the decks before they can be misused.

The show did well in non-North American markets (especially when it was imported back to Japan), in the U.S., Dragon Knight aired on a broadcast block managed by 4kids Entertainment. It suffered from low ratings due to lack of advertising and was cancelled around the tail end of the series. The last four episodes were not broadcast by them, and the final two were not broadcast at all, though they were uploaded to The CW's website. While 4Kids' didn't seem to care about the show, other CW executives liked it, and their running of several episodes within their daytime programming blocks resulted in the show ultimately winning an Emmy award for stunt coordination.

Received a sequel novel exclusive to Japan called Kamen Rider: Dragon Knight - 2WORLD 1HEARTS. The Riders are celebrating first anniversary of Ventara's liberation, but Kit had been held back by battle against the remaining mirror monsters. His arrival is further delayed by the connection between Earth and Ventara being severed along with attacks increasing once more. Len's appearance makes things only so much better. With no reinforcements on the way, the No Men have to accept the proposal of war veteran Colonel David Stuart and gather the earth Riders... all without anyone knowing about the arrival of a new enemy exceeding even the likes of Xaviax.

Not to be confused with The Dragon Knight or Knight Rider.

This series has a Character page.