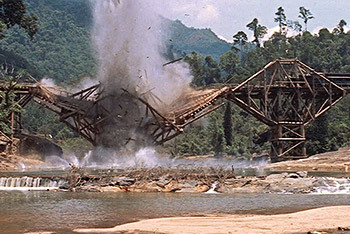 The page quote tells it like it is.
"You have the Bridge... what's left of it."
— Star Trek: Voyager, "Year of Hell"
Advertisement:

Want a big spectacular finale? Want to build a new set? Why not solve both your problems at the same time and trash the set?

Even animators are tempted to do this if the background is elaborate enough. May lead to a Rebuilt Set.

Not to be confused with Die, Chair, Die! or Tantrum Throwing. Related to Proscenium Reveal and On a Soundstage All Along (please make sure your examples relating to breaking the fourth wall in this way are on those trope pages). Sometimes it's an indication that Nothing Is the Same Anymore. For action shows, it can be caused by a case of All Your Base Are Belong to Us or Storming the Castle. If this is used in terms of driving up the production/story value, then it may be a case of a Finale Production Upgrade.

Alright Tropers, trash the page. We need to make room for these Video Examples!