Film / Ilsa, She Wolf of the SS 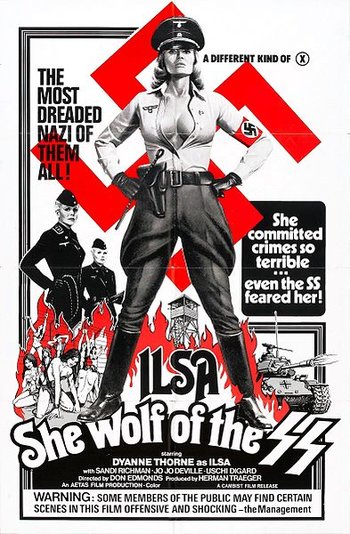 "It turns out all we needed to do to win the war was to just give the Nazis a good, deep dicking!"
— The Cinema Snob
Advertisement:

Ilsa, She Wolf of the SS, made in 1975 and directed by Don Edmonds, is the Trope Codifier of the Nazisploitation subgenre.

The Trope Maker of the Nazisploitation subgenre was Love Camp 7, made in 1969 six years earlier. When that was a big hit in Canada, André Link and John Dunning of Montreal distributor Cinepix quickly drafted the script for this movie, and secured David F. Friedman (who'd starred in Love Camp 7 and produced Herschell Gordon Lewis's Blood Feast) as a producer.

Former Las Vegas showgirl Dyanne Thorne stars as the eponymous Ilsa, the buxom, sadistic, nymphomaniac commandant of what seems to be an odd combination of a Stalag (prisoner-of-war camp) and a Jewish death-camp. Ilsa has an insatiable sexual appetite and each night takes one of the male prisoners to bed, castrating them when they ejaculate before she has orgasmed herself. By day, she conducts experiments on other prisoners, attempting to prove that women can sustain more pain than men and thus should be allowed to fight in the army. When an American prisoner by the name of Wolfe is brought to the camp who can withhold ejaculation, she is finally sated, but otherwise things turn to hell for her when his resulting allowance to live culminates in him rallying an uprising amongst the prisoners and her death.

Luckily for her, she's back alive and well in the sequels Ilsa, Harem Keeper of the Oil Sheiks (1976), Ilsa, the Wicked Warden and Ilsa, the Tigress of Siberia (both 1977).

Notable for being filmed on the former set of Hogan's Heroes.