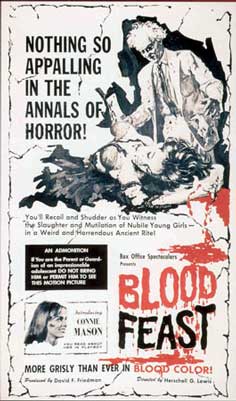 "Have you ever had an...EGYPTIAN FEAST?"
Advertisement:

Fuad Ramses (Mal Arnold) is an Egyptian caterer in Miami who secretly worships the Sumerian goddess Ishtar. He plans to resurrect her but he needs the body parts of pretty young women to do this. As the obvious ensues, two detectives try to track him down.

Though about as scary as a child's Casper costume the day after Halloween, the film is notable for being the first really, really gory movie — the first "Splatter Movie", as they're called — ever made in the west. It's also notable as the first film in Lewis' unofficial "Blood Trilogy" (the other films are Two Thousand Maniacs! and Color Me Blood Red). It had a spoof remake titled Blood Diner in 1987, a sequel (by Lewis himself) titled Blood Feast 2: All U Can Eat in 2002, and a straightforward remake (simply titled Blood Feast) in 2016.

According to producer David F. Friedman, the most difficult aspect of production was the fact that the women playing the victims couldn't stop giggling and laughing at what was being "done" to them on camera; not that he or Lewis cared that much, having infamously responded to a widely-circulated negative review with, "Herschell and I have often wondered who told the Variety scribe we were taking ourselves seriously."

"Nothing so appalling in the annals of tropes":