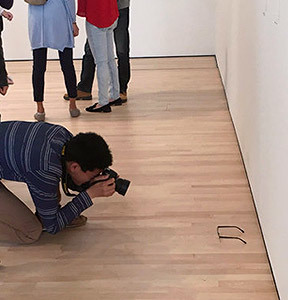 This must be indicative of how we are always looking outward to the world around us for a perspective more fulfilling than the fragile and empty ones we all posses, ever at risk of being crushed by the harshness of the world in pursuit of that fulfillment.note  Dude, it just means someone lost their glasses!
Pearl: All right. Who left their Crust Bucket wrapper here?
Marina: Don't touch that, Pearlie! It's not litter — it's modern art!
— Splatoon 2
Advertisement:

My, what a stunning painting! The stark green lettering over a plain white background forcefully expresses the artist's quest for meaning and direction in a confusing world. Truly a masterpiece. What do you mean, it's the "Emergency Exit" sign? My bad.

Often intended as a Take That! to contemporary art, this comedic situation involves somebody mistakenly believing that a non-artistic item among works of art is itself a work of art.

Compare Accidental Art and All Part of the Show. A person might invoke this trope deliberately to hide; see Nobody Here but Us Statues. If the object being mistaken for an exhibit is a person, it may be related to the Living Museum Exhibit. Essentially the converse of True Art Is Incomprehensible - this trope is people concluding that because something is incomprehensible, it must be art.