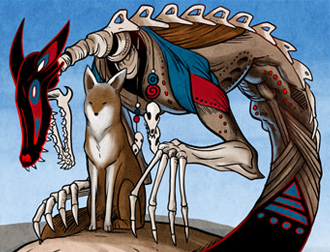 A coyote, and THE Coyote.
"This was no chicken, it was evil manifest."
— Kahlan Amnell (on the Chimes of Death), Sword of Truth: Soul of the Fire
Advertisement:

It's big, powerful and nasty. It's not humanoid, but familiar all the same.

This trope is for Eldritch Abominations that either naturally resemble (somewhat) ordinary animals, or else possess Animorphism and spend a good deal of time in the animal form. A Draconic Abomination takes the form of a dragon in particular. If the abomination has similar behavior to its non-eldritch counterparts, it might also be an Almighty Idiot.

See also Botanical Abomination for similar perversions of a different part of the natural world.