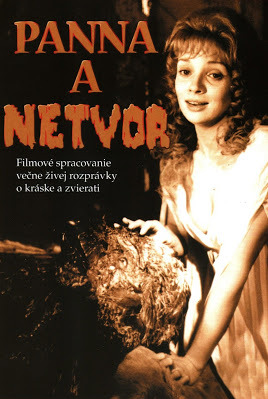 If you think this was your average Beast and Beauty love story, you haven't been paying attention.
"Every woman has the power to make beautiful the man she loves."
— Netvor
Advertisement:

Panna a netvor (translated as Beauty and the Beast in English) is the 1978 Czech adaptation of Beauty and the Beast, directed by Slovak director Juraj Herz. If you think this has your average Beast and Beauty love story, you haven't been paying attention.The film has plenty of Gothic Horror atmosphere and the rather innovative decision to depict the beast as a bloodthirsty, bird-like creature who's haunted by his thirst for blood and slowly-developing humanity.

One night, a bankrupt merchant is traveling to sell his late wife's portrait, but is caught by a storm and seeks shelter at Netvor's castle. Netvor, though he never shows up to the merchant, gives him food and shelter and takes an interest on the portrait. Before leaving, the merchant sees a rose bush and picks one as a present to our heroine, his yougest daughter Julie and the spitting image of the portrait. The merchant is instantly confronted by an enraged Netvor, who threatens his life, unless one of his daughters goes instead of him. Julie, the one who truly loves her father, goes immediately to Netvor's castle to save her father. Netvor is torn between his thirst for Julie's blood and his increasing attraction to her kind personality, which is slowly making him human...

Of course, The Power of Love ensues.