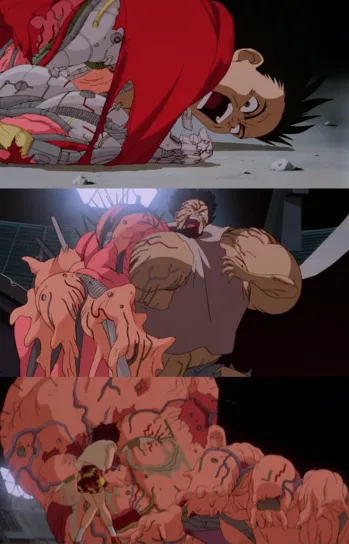 Kaori... help me...
"We see the Shade Stalker. Reality bubbles and drips where they step. Did you know they were human once, sweetling? It is hard to tell, harder to fathom. They have become so like the Dreamers, little fractal effigies. The changes you see are only the tip of the black iceberg. They have grown appendages in dimensions you cannot perceive."
— The Buzzing, The Secret World
Advertisement:

Ah yes, Eldritch Abominations. The embodiment of the incomprehensible, the grotesque, the omnipotent. Nothing can be so terrifying as a Cosmic Horror monster, regardless of its origins. Especially if those origins are someone as mundane as your average Joe.

Perhaps by some odd circumstances, a person, often from humble beginnings, ends up being transformed into something truly terrifying and grand in scale, possibly involving Body Horror. Sometimes they may transform into a Genius Loci somehow. It may be used simply to give a final boss a One-Winged Angel form, if nothing else, as there is plenty of overlap.

This can be caused by otherworldly viruses, a curse, or a consequence from Deal with the Devil.

However, this only happens once and is most often involuntary. Lovecraftian Superpower, while closely related, covers habitual and usually voluntary transformation. However, these are not mutually exclusive; one with a Lovecraftian Superpower may undergo The Corruption and end up transforming permanently into an Eldritch Abomination, with Transhuman Abomination usually being the end result.

Subtrope of Eldritch Abomination, and can overlap with many of its sisters. Related to From Nobody to Nightmare. Compare and contrast the Demon of Human Origin, usually a less eldritch, less hideous-looking equivalent of this trope. Compare Body Horror and The Corruption. Related to Power Makeover. Eviler twin of Superpower Meltdown. If the transformation itself is horrific, see Painful Transformation and Transformation Horror. Contrast Baleful Polymorph for when someone is turned into something harmless, and Bishōnen Line when a character gains a more human form as their power increases.