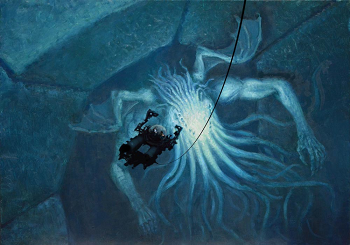 In his dwelling in R'lyeh, dead Cthulhu lies dreaming.note Artwork by Armand Cabrera

"There is no before. There will be no after. There is no place for time here among the dark, among the alien things that crawl and swim in a sea without light."
— Black Mage, 8-Bit Theater
Advertisement:

The ocean is mysterious. We know more about the surface of Mars than we do about our own oceans. The really deep, dark parts of the ocean are even more mysterious. When depicted in fiction, the ocean floors and trenches may be populated by unrelenting horrors the likes of which no human can comprehend: Alluring Anglerfish, Giant Squids, gulper eels, horrific leviathans — any briny monster you can name, and plenty more that you can't.

Until recent technological developments, no one had a chance at observing the deep sea. No ray of light can reach that depth, and Dark Is Evil. Oceanographers had almost no information to work with, and Nothing Is Scarier. Imagination ran wild. Some surmised that the ocean depths were a sort of Lost World where monsters that had ages ago vanished from the surface could still be alive and hiding. Great strange beasts that have not set foot on the shore since prehistory might be silently stomping across the silty seafloor. Creatures spawned before The Great Flood might be swimming down there, torpid and undisturbed — not disturbed yet, at least.

Submersibles and ROVs have allowed closer study of the ocean depths, and oceanographers have not found any Eldritch Abomination or Cthulhu in any part of the sea-floor. Nevertheless, there is still some Truth in Television to this for a host of different reasons: the environmental conditions (low or no light, high pressure, low temperature, low oxygen, and very little food or prey compared to shallow waters) in the midnight,note "bathypelagic", around 1,000 to 4,000 meters below sea level, abyssalnote "abyssopelagic", about 4,000 to 6,000 meters below sea level; ocean floors are included in this zone, and hadalnote "hadopelagic", extending down to about 11,000 meters below sea level, zones of the ocean have led organisms to evolve traits that are completely different from creatures that evolved on land and even from some shallow water fish. For example, many creatures do not have eyes or have evolved special eyes due to the lack of light, and are usually either very dark, transparent, or bright red in color.note Most deep sea creatures have no need for thick skins due to the lack of light and unltraviolet radiation from the sun, so theirs tend to be transparent. Their eyes being bright red is the result of submarine light reflecting off of the back of their eyes which illuminates blood flowing through their bodies. If you've ever seen people with red eyes in a photo that was taken with a flashing camera, you've seen this effect. This biome is utterly inhospitable to humans, and the logistical difficulties of conducting research in it only adds to these regions' sense of mystery.

Not to be confused with Time Abyss. May overlap with Eldritch Location, although the work can portray the deep ocean as relatively "normal" but just home to creepy things. Also compare Space Is an Ocean, as stories about exploring the deep sea may share genre conventions with space stories and portray sea life in a manner similar to aliens, and Ocean Madness, the feeling of insanity after being out (or in this case, down) at sea for too long. See also Creepy Old-Fashioned Diving Suit for another otherworldy source of horror on the ocean floor.

A corridor within the earth that extends far below the Marianas Trench. Nothing can live in it...

A corridor within the earth that extends far below the Marianas Trench. Nothing can live in it...