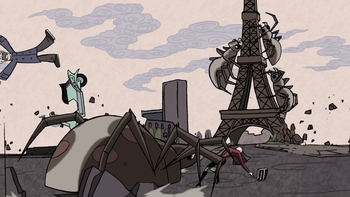 When Chewing the Scenery goes too far.
"...a kind of giant space-going shark, a moving appetite, a vast, fast, terrible eating-machine which saw its purpose to be turning everything edible in the universe into shark shit."
— Spider Robinson, Callahan's Secret
Advertisement:

The Imperium's first encounter with an extragalactic threat, recorded in all its canonical "glory".

The Imperium's first encounter with an extragalactic threat, recorded in all its canonical "glory".