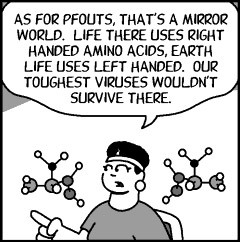 Human customer: I just need to pick up some spices. Amino dexterous and amino sinister, if you have it.
Turian shopkeeper: You don't mix your spice chirality! What cooking school did you say you went to?
— Mass Effect 2
Advertisement:

or "handedness". That is, they are not the same as their mirror image, like a left shoe which will not fit properly on your right foot no matter how you rotate it. This matters because a lot of the molecules our bodies consist of are chiral, in particular the amino acids, which are the building blocks for proteins. All multicellular organisms on Earth are made of L-(or levo-)amino acids.note This is not to be confused with the molecule's optical activity: that is, if we shine a light through its solution, l-isomer will rotate its polarization plane (a plane the EM-wave is oscillating) to the left, that is, counter-clockwise, and d-isomer, or dextrorotatory one, will do it to the right, or clockwise. Many L-isomers are in fact l- (or (-), as chemists now prefer to designate them) isomers, and vice versa, but it's not true for all of them. Dextro-amino acids (except cysteine) are exceedingly rare in Earth organisms and are used only by some bacteria and in a few very specialized cases by larger creatures. Science-fiction writers have commonly Shown Their Work by referencing this fact. It generally comes up in one of two situations:

In either case, this usually manifests itself as an inability to eat the same food in the same way. Either food tastes different depending on your handedness, or wrong-handed food has no nutritional value or is actively dangerous. There may be some mention of the fact that ethanol is a biologically interesting molecule that doesn't have this property — so, regardless of chirality, everyone can always get drunk together, and you can make moonshine from organic stuff that's otherwise useless for you because it's of the wrong chirality.

This is often a form of Artistic License – Chemistry, especially when authors try to extrapolate to what happens with molecules that are too complex to be synthesized chemically. Contrast No Biochemical Barriers.