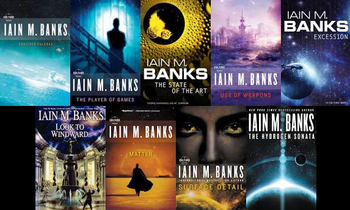 "You might call them soft, because they’re very reluctant to kill, and they might agree with you, but they’re soft the way the ocean is soft, and, well; ask any sea captain how harmless and puny the ocean can be."
— Cheradenine Zakalwe, Use of Weapons
Advertisement:

The Culture is a series of novels (and some short stories) by Iain M. Banks which share a common setting, the civilization known as The Culture.

The Culture is a star-spanning "empire" organized along socialist/libertarian/anarchist principles, achieved through post-scarcity technology. The seven or eight humanoid species that founded the Culture along with the others which joined later live without want, and without the need to work; practically anything they can ask for, they can receive. This is largely because the organic Culturniks are under the benevolent de-facto dictatorship... ahem, guidance of the A.I. Minds that control the starships and space habitats the entire Culture lives on.

For some, even utopia can wear thin without a sense of direction. Therefore, the Culture gleefully throws its weight behind Contact — an agency/program/conspiracy that exists to help other species and governments in the galaxy reach the Culture's standard of living without being too disruptive of their societies. And for the cases where standard diplomacy, or even open warfare, would not help, there exist... Special Circumstances, the Special Ops wing of Contact that intervenes as discreetly as possible (but as messily as needed) to make the universe a better place, at least by the Culture's standards.

The novels mostly follow the interaction between the Culture and other species and societies — both less and more powerful than themselves.

The Culture provides examples of the following tropes: