Every Device Is a Swiss-Army Knife 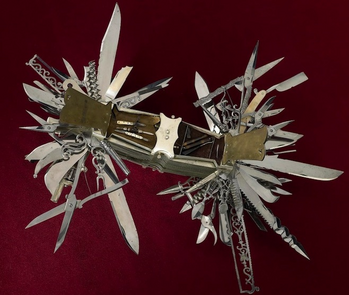 All devices have mass customization.
Advertisement:

Remember the good old days when a phone was just for calling people? Remember when game consoles and handhelds were for precisely games? Not so anymore. In a more contemporary (and/or futuristic) setting where folks have high expectations in terms of technology, any device that doesn't have multiple functions beyond its initial one is classed as Crapola Tech even when it genuinely does work. The general logic of the "jack of all trades" convenience being superior to the specialized frequently plays a part in this. And on certain occasions, Spy Fiction will feature technology of this caliber, particularly in the form of weaponized vehicles. A common joke related to this is that the machine is so complicated, people can't figure out how to use it for its intended purpose. Most definitely Truth in Television, especially if Everything Is Online.

Do Anything Robots and Super-Powered Robot Meter Maids are exemplary examples, as well as Swiss Army Weapons in general and Swiss Army Guns in particular. Magic Tools are the logical result of this trope.

Contrast When All You Have is a Hammer…, which is where a device is used in this way regardless of its actual flexibility, and Shoe Phones, which have primary functions just as illogical.

Alternative Title(s): Everything Is Multipurpose