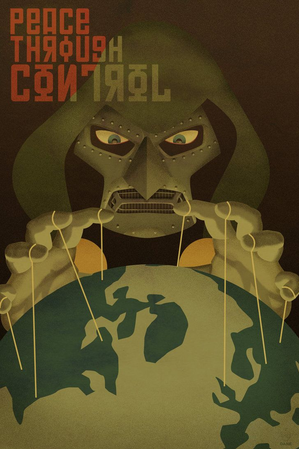 "I'll give you that. Killing off five billion people did wonders for most of our social problems."
— Dave, Civil Protection, on The Combine's invasion of Earth
Advertisement:

The first and least despicable trope in the unholy trinity of villainous objectives, Utopia Justifies the Means is where the goal of the Big Bad is the creation of a Utopia in the long run, a better world for everyone as a whole (or at least "better" for them in the villain's eyes), no matter what the cost.

It's a place built out of dreams and starlight; the name "Utopia" is a somewhat poignant pun by its author, blending the Greek words for "Good Place" (eutopia) and "No Place" (outopia), and despite (or perhaps because of) its unattainable nature, it has endured in myth and dreams since. While dreaming about what it would be like is harmless (like how topless glamour model volleyball would be the national sport, bureaucrats would work recycling paper, there's No Poverty, and ice cream is just as delicious with none of the calories... mmmm...), it's just a dream based on nothing more solid than wishful thinking.

For the Fallen Hero, Dark Messiah, Totalitarian Utilitarian, Well-Intentioned Extremist, He Who Fights Monsters, and other visionary villains, however, that's not the case. Obsession with the idea of Utopia will convince them that it is possible, and almost guarantees a Face–Heel Turn as they become willing to do anything to obtain their Ambition of Paradise.

They will plan to Take Over the World, use the heart of an orphan or an Artifact of Doom, steal the Cosmic Keystone, commit mass brainwashing, sell themself to higher powers or unleash the Apocalypse so that they can destroy all resistance and usher in their own ideals for Utopia. They will operate under the assumption that this wonderful new world has them at the top, free to exert a benevolent or iron-fisted regime as they will. Using logic that would make Machiavelli blush, they reason that every sacrifice and atrocity is worth The Greater Good, putting the Well Intentioned in Well-Intentioned Extremist. The Knight Templar often claims this to himself before succumbing to the decidedly less benevolent Despotism Justifies the Means.

A great deal of drama can be derived from this — are they willing to kill a friend for it? Will they put their vision where their mouths are and kill themselves if need be, or is there a line even they will never cross? Will they even admit that some of the things they do are Dirty Business? Some are able to inspire incredible devotion in their followers precisely because their vision and conviction includes that they know they won't live to see the paradise they plan to bring about, or don't deserve to. One final terrible sucker punch is for their vision to be revealed as a Tragic Dream— even if it went off without a hitch, the resulting world is worse off, not better.

When it comes to different kinds of extremists, a Totalitarian Utilitarian is far more likely to think this way, while a Principles Zealot is more likely to believe that Utopia justifies nothing.

Heroes and the audience will be faced with the philosophical conundrum that maybe The Extremist Was Right and the world is in truth a Crapsack World that needs a total renovation like what the villain says, but is the renovation worth sacrificing billions? In more morally ambiguous situations, the "means" might not be catastrophically destructive, all it takes is a "small", inconsequential sacrifice when The Needs of the Many outweigh the needs of the few. Say, selling forsaken little girls to alien slavers in exchange for technological advancements for mankind as a whole, or the daily ritual slaughter of criminals to appease the gods and ensure prosperity, or the ever popular The Singularity Lotus-Eater Machine Assimilation Plot where suffering does not exist. If his ideals guarantee the happiness, survival, civilization, and/or progress of the human race, isn't it worth it? The Heroes may decide that total demolition is not the answer, and it's better to make the most out of what you have while allowing humanity to decide for itself.

Often utilizes some form of Aesoptinum, generally with the message "Peace and harmony isn't worth getting rid of The Evils of Free Will".

Curiously, the first example of a Utopia in recorded literature — Plato's The Republic — is an example of this trope (possibly) played absolutely straight and not as means for the opposite Aesop. Plato argues that the establishment and survival of the perfect state requires autocratic rule by philosopher-kings bred from a system of eugenics and there should be a "noble lie" that the citizens must be taught to induce them to love the state unconditionally.