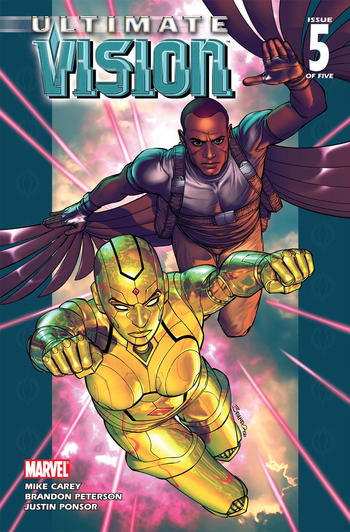 "Gah Lak Tus was the very definition of "monster" to me. But then I met you, doctor Tarleton. Definition — amended."
— Vision
Advertisement:

Ultimate Vision was a 2007 comic book by Mike Carey and Brandon Peterson. It is set in the Ultimate Marvel universe, in the aftermath of the Ultimate Galactus Trilogy.

Issue #0 is set after the recovery of the Vision in Ultimate Nightmare. She completes self repairs, reveals her true form, and narrates her story. For half a billion years, she has been going to each world in Gah Lak Tus' way, warning about the upcoming destruction, but always failed to save them. Those stories had been published earlier as epilogues in the several ongoing Ultimate titles (Ultimate X-Men, Ultimate Spider-Man, Ultimate Fantastic Four, etc), before the climax of the crossover event.

After the crossover event, Gah Lak Tus has finally been defeated. He had to leave Earth, unable to destroy it. But he still lives, so the Vision prepares to jump to the space and continue warning other worlds. But when she leaves the atmosphere she notices a call from a nearby satellite. A.I.M., led by Dr. Tarleton, secured a damaged and inert unit of the Gah Lak Tus swarm, and tries to retrieve its secrets. Vision interfaces with it, thinking that they intend to find out how to destroy Gah Lak Tus, but she was deceived: Tarleton wants to control the unit. He enhances himself with it, and blasts her. She manages to self-repair with the help of Dima, an artificial girl created there, but things soon turn into a disaster: Tarleton becomes a slave of Gah Lak Tus' will, all the others turn into purple monsters, and the unit arranges for the satellite to fall to the planet. The unit then tries to proceed to Gah Lak Tus' original goal, by digging into the planet's core and making a planetary explosion. It is finally destroyed by Vision, Tarleton and Sam.

Vision was injured during the whole adventure, and repairs will take a month. So she will stay with Falcon during that time.