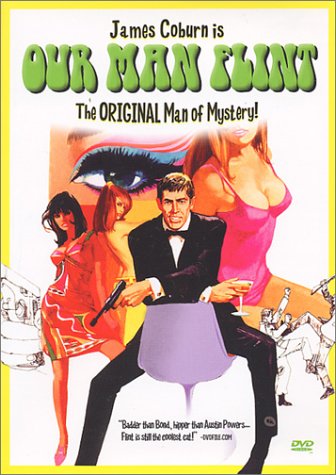 Our Man Flint is a lighthearted 1966 parody of James Bond movies, starring James Coburn as super-mega-omnicool (ex-)Z.O.W.I.E. agent Derek Flint, along with Lee J. Cobb as his harried former boss, Lloyd Cramden. Flint is forced out of retirement to battle Galaxy, an organization led by a trio of Utopian Mad Scientists out to take over the world via their weather-control machine. His investigation leads him across Europe to Galaxy agents Gila and Rodney (Gila Golan and Edward Mulhare), and eventually Galaxy's secret headquarters. You can guess what happens then.

Easily one of the best of the slew of 1960s Bond imitations. A year later a sequel came out, In Like Flint, which features Coburn and Cobb reprising their roles in a fairly lackluster rehash. This, plus Coburn's reported desire to avoid being typecast in the role, put an end to any thought of an ongoing franchise, though many years later an in-name-only "sequel" was made for TV starring Ray Danton as Flint.

A major influence on the Austin Powers movies, to the point the sequel was explicitly referred to as being the title character's favorite movie.

Our Man Flint contains examples of: