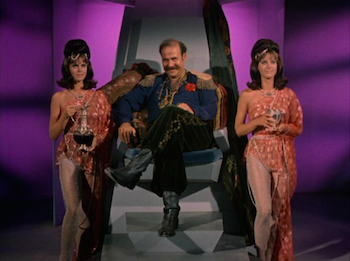 There's something strange about this Enterprise crewman. He never smiles, never engages in small talk, shows great reluctance to talk about his past, and he isn't Mr. Spock. He soon takes over the ship and reveals that his name is Norman, he is an android and they will be going to his planet—no ifs, ands, or buts. Once in orbit, Norman specifies who will be in the landing party. Kirk and company find they have no choice but to comply when Norman threatens to destroy their engines. When they beam down, who should greet them on a grand throne but their old friend, Harry Mudd?

It seems that after Harry decided to release himself on his own recognizance (i.e., he broke jail) he crash landed on this planet of androids who immediately made him their emperor. It seems the androids are very much like Lumiere and his friends. They're just not happy without people to serve. And now that they have an entire starship full of people to serve, Mudd can now leave his android followers for a permanent vacation.

Yeah, that's what he thinks.

Captain Kirk and Harry Mudd use the liar's paradox to defeat the android Norman.

Captain Kirk and Harry Mudd use the liar's paradox to defeat the android Norman.