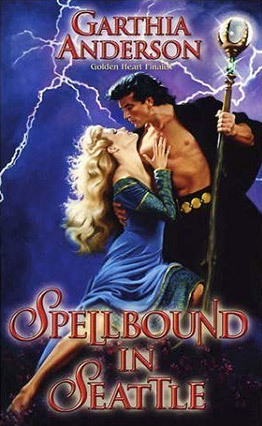 "Your broad chest! Your powerful arms!
Your huge staff!"
"If we hadn't married Muggles we'd've died out."
— Ron Weasley, Harry Potter and the Chamber of Secrets
Advertisement:

A romance, sexual or otherwise, between a Muggle and a magic user.

The Muggle doesn't necessarily have to know about it. If they do, reactions can vary from Understanding Boyfriend to Fantastic Racism.

The couple may also have to deal with issues that may arise where one half of the couple is just that much more powerful. If the Muggle is rather tolerant and understanding though, and both the Muggle and the magic user work at it if necessary, the issue can be smoothed over. If the muggle assumes a de facto submissive position in the relationship due to the power imbalance, expect overlap with Muggle in Mage Custody. If the power balance issue cannot be resolved adequately, it can lead to an end in the relationship. If the inequality between the Muggle and the magic user serves as a "turn-on", with the latter habitually telling the former something like "If you upset me, I will put a curse on you", the trope overlaps with Power Dynamics Kink.

Factors that affect how the society views this sort of romance depend on the nature of magical society, mundane society, any sort of Masquerade, how magic is acquired (learned vs. inherent gift), other intrinsic differences between muggles and mages, etc.

Do note that since it is often played the same way, romances between superheroes who are not Badass Normals and ordinary people, Badass Normal or not, can also fall under this trope.

The muggle partner is very likely to become a Muggle with a Degree in Magic.

If the couple become a Battle Couple, expect them to be a Sword and Sorcerer.

If a relationship of this sort exists within the setting, odds are that there may be an aesop about tolerance.

The Masquerade Will Kill Your Dating Life can negatively impact on this kind of romance. If the Mage also has a longer lifespan, it may also result in a Mayfly–December Romance.

It is the Super-Trope to Magical Girlfriend & Muggle-and-Magical Love Triangle, and a Sister Trope to Boy Meets Ghoul.

See also Interspecies Romance, where there is a lot of overlap in terms of themes and portrayals.