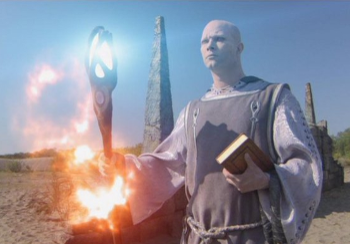 Giving little to no cares about the laws of science since 1997.
"He doesn't necessarily hit you with his sword arm. He hits you with his faith."
— D&D designer Andy Collins, on 4th Edition Paladins
Advertisement:

Faith and power have always gone hand in hand, and not just power in the spiritual and social senses — religion and magic were the same thing for most of the world's history. Every religion's most devoted practitioners are associated with supernatural powers — often by people within the religion itself, and almost universally by those outside it. Going the other direction, having magical powers has, historically, meant that person was associated with some sort of supernatural entity, whether calling upon the gods or consorting with evil entities. (One possible exception is Greek mythology, where magic was the "art of controlling the secret forces of the cosmos", but even their priests still begged their gods and other higher powers for favor.)

This is also true of Eastern religions such as Buddhism, but treated somewhat differently; many Asian traditions ascribe mystical powers to those who have, through meditation and spiritual growth, become more closely attuned to the truth of the universe. They are not seen as contacting a specific supernatural entity; rather, through religious experience, they attain a mental state of connection with the living universe that grants them abilities beyond normal humans. Going further, some esoteric or shamanistic schools of Japanese Buddhism feature an inversion of this contact with entities, as converting and controlling spirits and Oni is part of their folklore.

Even the word "magic" comes from religion; it is derived from "magi", the Persian astrologer-priests. (The word is translated as "wise men" in some versions of The Bible.)

The Bible began to split the two concepts apart — it mentions followers of "false gods" being able to perform magic, usually in contrast to much more impressive miracles (though this can be said to be a type of magic) performed by God (and explicitly not performed by the prophet himself), but generally explains this as power granted by the Devil. And if it is granted by the Devil, it must be evil.

The modern idea of a 'wizard' — somebody who can just do magic entirely on their own, whether born with the gift or trained in mystic arts — originated in ancient Greece, where it eventually died out, only to later redevelop in the 20th century, and was not solidified until Dungeons & Dragons made a strong distinction between Priests and Wizards ("divine" and "arcane" magic, respectively). The increasing importance of science and technology in our world has trained people to think of even amazing and wonderful events as being under human control and within human understanding, and our concept of magic has similarly changed into something closer to "science we don't understand", with comprehensible, repeatable rules, rather than begging for favors from entities greater than us (though that may still be an option in some fiction).

This change in understanding has affected our view of some historical forms of magic. Hermetic Magic and Alchemy tend to be presented today as "science-like", though their practice involved a great deal of calling out to spirits, angels, and other such entities.

Common magical religion powers include Turn Undead, exorcism of demons or other spirits, and other variations on Holy Burns Evil. A Church Militant may also get the Holy Hand Grenade.