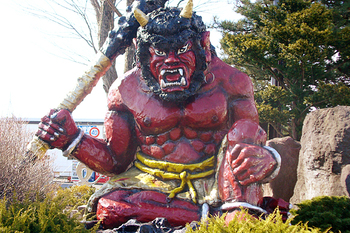 A standard red oni
"A ubiquitous character in Japanese folklore, religion, and popular culture, the oni may be variously translated into English as 'demon,' 'devil,' or 'ogre.'"
— The Book of Yokai: Mysterious Creatures of Japanese Folklore
Advertisement:

Oni are brutish mountain Youkai superficially similar to Trolls and Ogres, with either one or two horns (which in some depictions are the source of their power). The word is almost always translated into English as "demons" or mistranslated (by tradition) as "ogres". Contrary to the common mistranslation, Oni starkly differ from traditional depictions of Western ogres. While still large, strong, and often brutish, Oni are known for possessing powerful magic and being far smarter than ogres. Further, certain types are very calm and introspective, and female oni being very beautiful who can get along well with (and sometimes marry) humans. They are sometimes depicted as good and sometimes as bad, but are usually morally neutral and interested in their own affairs rather than the usually outright malevolent ogres. They prefer huge bludgeoning weapons (iron clubs called kanabō being the most common) and hide loincloths (usually tiger-striped). They are also shown to really love their alcohol, which can make them even more rowdy. Sometimes blamed for streaks of misfortune or violent weather. Others work jobs in Fire and Brimstone Hell as big red devils.

If Oni come in pairs, there's a good chance one will be red and the other blue. However, they won't always match the Red Oni, Blue Oni dynamics. If some Oni are explicitly female, Bizarre Sexual Dimorphism may occur with males looking Gonky and the females looking more conventionally attractive. Which is consistent with their mythological descriptions.

"Oni" originally referred to misfortune, bad vibes and evil spirits, which were traditionally said to come from the northeast. Under the Eastern Zodiac this is known as the "ox-tiger" direction, so these forces came to be anthropomorphised as beings with features of oxen and tigers. Because they're Made of Evil (or at least Made of Chaos), supernatural powers used by oni are often classified as jujutsu ("hexes", "maleficium" or "witchcraft") even when they're overt or harmless.

Sometimes particularly wild and brutish humans are depicted as transforming into oni as they are warped by the foul energies surrounding them. At some points in Japanese history the word "oni" became practically synonymous with "barbarian", and conquering or pacifying territories was described as "ridding lands of oni".

Particularly powerful oni may be described as kishin (literally "oni god"; the "ki" is an Alternate Character Reading of "oni"), a term used in Japanese Buddhism to refer to Wrathful Deities

, while in some istances the term "Akki" (literally Evil Oni) specifically design evil-minded, man-eating oni. Incidentally, the Japanese word for vampire (kyuuketsuki) can be translated as "blood-sucking oni"; see here for details.

Hyakki Yakou, the Japanese equivalent of The Wild Hunt, literally translates as "Night Parade of 100 Oni", though this usage is metaphorical (most depictions of the Parade include a wide variety of Youkai) and is usually glossed as "demons" even when oni is otherwise left untranslated. That said, it has lead to a number of works that use some variant of "Hyakki" (or worse, "Senki"note "1,000 oni") as a name or title for a particularly powerful oni; in more literal cases they may even be 100 demons fused together into an Eldritch Abomination.

Compare Horned Humanoid. For the Oni's Western counterparts, see Our Ogres Are Hungrier and All Trolls Are Different (and occasionally Our Demons Are Different).

See also Smash Mook (and some Oni in video games will be that kind of enemy).

Gaijin Goomba (both the real person and his cartoon goomba counterpart) explain to the viewers just what the Oni is.

Gaijin Goomba (both the real person and his cartoon goomba counterpart) explain to the viewers just what the Oni is.