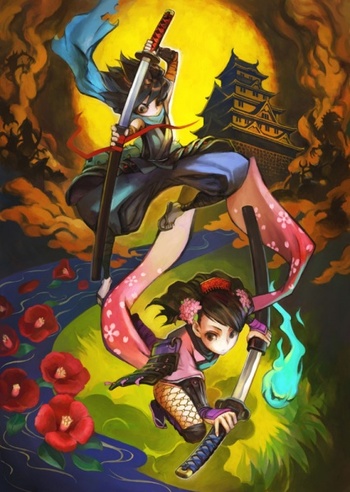 Momohime and Kisuke, a couple of real sharp dressers.
Legend tells of the swordsmith Muramasa Senji, whose blades, though unparalleled in quality, carry with them a terrible curse. Though these "Demon Blades" can cut through anything, they compel their wielders to uncontrollable bloodlust, and they must draw blood before being resheathed... whether that blood is from an enemy or the swordsman himself.
Advertisement:

Muramasa: The Demon Blade (or just Oboro Muramasa in Japan) is a 2009 action-RPG game, made by Vanillaware and released for the Wii, that tells the stories of Kisuke, a fugitive Iga Ninja determined to recover his lost memories, and Momohime, a Narukami princess who is possessed by the spirit of an evil swordsman, Izuna Jinkuro, and is helping him to return them both to functional bodies. Armed with Muramasa's earthbound spirit and his demonic blades, the pair battle through Feudal Japan, searching for their destinies on battlefields soaked in blood.

In 2013, the game was ported to the Playstation Vita as Muramasa Rebirth (still just Oboro Muramasa in Japan), with an updated script and controls. In addition, Muramasa Rebirth got Downloadable Content, which took the form of an alternate mode; called "Genroku Legends", it features nothing regarding Muramasa or his Demon Blades, instead focusing on completely different/new characters in four three-chapter-long stories that take place in the same universe.