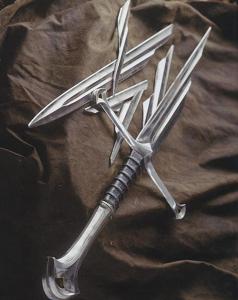 Is there a blacksmith in the house?
From the ashes a fire shall be woken,
A light from the shadows shall spring;
Renewed shall be blade that was broken,
The crownless again shall be king.
— Bilbo's poem for Aragorn, The Lord of the Rings
Advertisement:

A blade, once broken, reforged! It's probably the Sword of Plot Advancement or Infinity +1 Sword, but it could also just be the hero's signature weapon, if it got broken somehow. In reality, going through something like this would weaken the integrity of a blade, if it is possible at all (realistically "reforging" a blade would be melting down and recycling the metal as well as adding some new metal if you want a same sized blade, effectively making it a new sword, which might be handy for Unobtainium). In fiction, they might actually come out of the reforging stronger than they went in.

If the sword was broken "in ages past", you may have to hunt down each individual fragment separately in order to put it back together, which makes them Plot Coupons if it's for the Sword of Plot Advancement. You may also need to track down some "legendary smith" to do the actual forging.