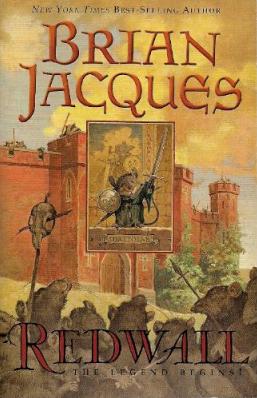 "No doubt your sword is indeed a beautiful thing. It is a tribute to whoever forged it in bygone ages. There are very few such swords as this one left in the world, but remember, it is only a sword, Matthias! It contains no secret spell, nor holds within its blade any magical power. This sword is made for only one purpose, to kill. It will only be as good or evil as the one who wields it."
— Squire Julian Gingivere, Redwall (1986)
Advertisement:

A lengthy series of books by Brian Jacques, about a fantasy world in which all kinds of animals are the equivalents of people: they wear clothes, live in buildings, have humanlike societies, et cetera. Yet they also retain some of their animal natures, which usually manifest as specific skills: such as moles being expert workmen, especially at digging, and otters being skilled swimmers and shrimp fishermen.

The series centers on Redwall Abbey, a commune devoted to peace, though many who live there are quite capable of defending themselves if attacked. The books take place across a vast time period that may span centuries (it's difficult to tell since the characters measure time in ill-defined "seasons"). Most are complete stand-alone stories, so they can mostly be read in any order. In fact, for a while, Jacques wrote the stories wildly out of chronological order, though in his final years, he set each book further ahead in time than the last one. Only four books (Redwall and Mattimeo, Mariel of Redwall and The Bellmaker) act as direct sequels featuring most of the same characters. Most others do share a few characters, albeit many seasons apart.

Typical stories consist of some villainous horde laying siege to the abbey, while/or some of its inhabitants have to venture somewhere else. Either way, several exciting medieval-style battles ensue until the book's villains are defeated. Despite the lack of an ongoing story, continuity lovers will find much to admire in the consistency of the world surrounding Redwall; each book's inside cover features a map of the territory the story covers, and they all fit together very well (although things may change slightly over the years). Other societies, like the badger lords and hare soldiers of the mountain fortress Salamandastron, or the wandering Guosim shrews, pop up frequently and have a real sense of history to them. As well, some of the most exciting times for fans came with the publications of the books Martin the Warrior and Lord Brocktree, as the eponymous characters are mentioned numerous times in other books as legendary warriors from the past, meaning that with the titles alone Jacques was announcing that we would finally be seeing the real story behind those legends.

The books, by order of publication, are:

Jacques died of a heart attack on 5 February 2011,

leaving his 22nd novel, The Rogue Crew, finished but unpublished; the book was later released on May 3rd, 2011.

The Animated Adaptation was made by the Canadian company Nelvana and featured 36 episodes over three seasons - the first based on the original book, the second on Mattimeo and the third on Martin the Warrior. It was played on PBS Kids (really) by way of American Public Television in the United States and Teletoon in Canada. The show's respect for its source material, its strong writing, and unforgettable characters have garnered it great praise, and it is widely considered among Nelvana and Teletoon's all-time best shows, as well as one of the true icons of Canadian animation. You can see it in its entirety on Nelvana's Treehouse Direct channel on YouTube.

An Adventure Game video game series based on the books is currently in the works. In the first game, "The Scout",

you play as one of two mice from a village called Lilygrove, not far from Redwall Abbey: while training to become members of a group that protect the village, Lilygrove is suddenly attacked by a band of pirates led by the wearat Scumsnout. The second game, "Escape the Gloomer,"

is a text-based game set during the events of Mossflower.

was greenlit by Netflix with Patrick McHale as the main writer.

Has a character page in progress.

Not to be confused with Red Cliff.

open/close all folders
Tropes A-D
Tropes E-I
Tropes J-N
Tropes O-T
Tropes U-Z
Statler: Wow, I never knew mice could be religious while also killing people!
Waldorf: Yeah. Yet only the stupidest of villains would inflitrate a place with a name as stupid as Redwall!
Both: Do-ho-ho-ho-OH CRA-*slice!*
Matthias: That's what you get for insulting the fair name of Redwall Abbey!
Feedback

Example of:
Murder by Mistake