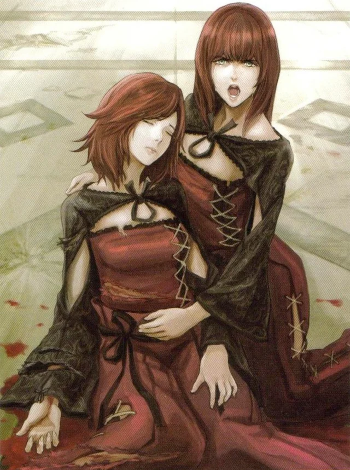 "You cut down my sister like a goddamn animal and you want to stop?"
"I can't hear it... I can't hear my other heartbeat anymore!"
— Jr./Rubedo, Xenosaga II
Advertisement:

A pair of twins are introduced. They are portrayed as being sufficiently alike that even people who have known them for a long time have trouble telling them apart. Often they serve as comic relief, enjoying the confusion they might cause just as much as the audience. It is highly likely that one twin, and only one, will be killed off. Why?

In Backup Twin, a character is introduced and later killed off. Only after their death is it revealed they had a Backup Twin, who carries on in the deceased character's place as if nothing had happened. The original twin is often never mentioned again once the new twin explains that he is a twin (or clone, if science fiction) and not the original character brought back to life.

In this trope, either the twins are introduced at the same time or close to it, or else the surviving twin is introduced first, and the dead twin is then introduced in a flashback. The death of the twin must have a profound or at least significant effect on the survivor for it to be this trope. The victim doesn't always have to be an identical twin, provided they play that role.

If the death of the twin occurred after the birth of both children or at early age, because of religion, superstition or popular beliefs, then it's One Twin Must Die.

This being a Death Trope, there be spoilers.