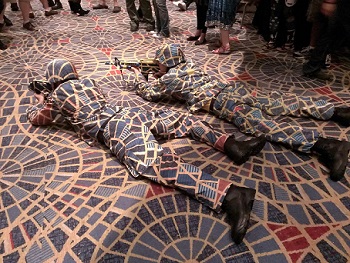 And the award for Most Meta Cosplayer goes to...the Carpet Soldiers!
Advertisement:

Just a thin line above true Invisibility, a character simply fades from sight by taking on the appearance (color and pattern) of the background behind them. Generally done by characters of supernatural leanings, but doesn't require actual possession of invisibility (cloak or otherwise).

See also Wallpaper Camouflage. Related to Visible Invisibility. Worth noting that most real chameleons can't actually do this, though a few other species (like some types of octopuses and cuttlefish) actually can.

Indiana Jones walks across a bridge painted to perfectly blend in with the cave behind it.

Indiana Jones walks across a bridge painted to perfectly blend in with the cave behind it.