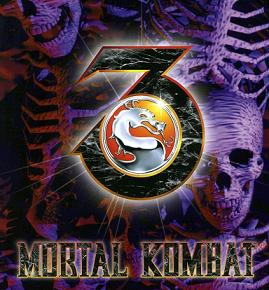 There is no knowledge that is not power.
"You have been chosen to represent Earth in Mortal Kombat. Be warned. Although your souls are protected against Shao Kahn's evil; your lives are not. I cannot interfere any longer as your Earth is now ruled by the Outworld Gods."
— These are the words of Raiden.
Advertisement:

The Mortal Kombat series was at the peak of its popularity in the mid-90s. In 1995, the long-awaited Mortal Kombat 3 premiered in arcades before being ported to the Super NES, Sega Genesis, Game Boy, Game Gear, Nintendo 64, PlayStation, and PC. Roughly half of the second game's cast returned, along with the secret characters. Several new characters were introduced including the cybernetic ninjas Cyrax and Sektor, the maimed warrior Kabal, the female Shokan Sheeva (a Distaff Counterpart to Goro), Badass Native Nightwolf, off-duty cop Kurtis Stryker, evil robo-centaur Motaro, and Kitana's resurrected mother Sindel.

Sindel's presence is the key to this game's story: Shao Kahn murdered her husband and Kitana's father King Jerrod before claiming her for himself, forcing Sindel to flee to Earth where she eventually died. She was resurrected and brainwashed by Shang Tsung's Shadow Priests on Earth, allowing Kahn to enter Earthrealm to reclaim his Queen...and summon his forces to conquer Earth at the same time. Raiden, unable to take an active role in Earth's defense due to his status as a god, gathers Earthrealm's best remaining fighters together in order to beat back Kahn's forces and isolate the havoc to a single U.S. city.

On the gameplay side, Mortal Kombat 3 introduced the "Run" button (along with a sprint meter), Kombat Kodes that allow players to unlock secret characters and other bonuses), chain combos (referred to as "Dial-A-Kombos"), Animalities, and character-dependent blood.

MK3 received two updates. The first, Ultimate Mortal Kombat 3 (or Mortal Kombat 3 Ultimate), brought back all of the masked ninjas from the previous games and introduced the Ascended Meme Ermac. The second, the home-console-exclusive Mortal Kombat Trilogy, restored the remainder of the missing roster, added Goro and Kintaro as playable characters, and introduced yet another masked ninja in Chameleon/Khameleon depending on which version you're playing: The female Khameleon is exclusive to the N64 version, but the bosses are unplayable. The male Chameleon is playable in the CD versions.

You have proven to be the surpreme Mortal Kombat warrior.
The Elder Gods now descend upon your world to grant you eternal power.
More Kombat....Fall of '95.
Feedback