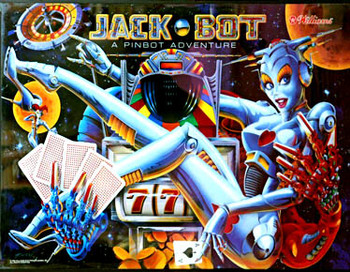 A Sure Bet!
"It's Within Everyone's Reach."
Advertisement:

Jack*Bot (full title: Jack*Bot: A Pin*Bot Adventure) is a 1995 pinball game made by Barry Oursler and Williams Electronics, with art by John Youssi. It is a sequel to both Pin*Bot and The Machine: Bride of Pin*Bot, using a rethemed Pin*Bot playfield with a dot-matrix display added.

The game is themed around an intergalactic casino, with Pin*Bot and The Machine hosting four gambling games — Pin*Bot Poker, Slot Machine, Roll the Dice, and Keno — with several other methods of getting points. Eventually, you'll get to the Casino Run, where you spin a slot machine to rack up points and prizes while avoiding the bomb.

One interesting game mechanic is that the player can cheat in most modes by mashing the Extra Ball buy-in button, letting Pin*Bot improve the outcome in some way. Every casino game offers a chance to go for double or nothing afterward.

The game tends to be contested, as it's basically just Pin Bot WITH A CASINO THEME! Nonetheless, it has its share of fans who appreciate its dot-matrix display and challenging gameplay.

A digital version was available for The Pinball Arcade before the license to all WMS tables expired on July 1, 2018.