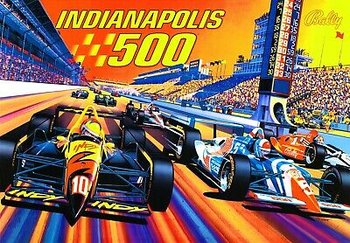 Pedal to the Metal... and NEVER LIFT!
Paul Page: "Welcome to Bally's Indianapolis 500, the greatest spectacle in pinball. Paul Page here, along with Bobby Unser. Bobby?"
Bobby Unser: "That's right, Paul. It's a great day for racing — and a great day for pinball!"
Advertisement:

Naturally, the game is a nonstop frenzy of speed as thirty-three racers compete to win the world-famous Indianapolis 500 auto race. As the table rumbles with the action, endure all two hundred laps, make your way past the other racers, and go for the Checkered Flag and the Victory Lap. Along the way, you'll collect spanners, complete waves, and pick up some souvenirs to boost your score. Complete the ten Speedway modes, Pass opponents to advance your Position, but watch out for Dueling Drivers or else you'll Hit The Wall. Go for the Speed Ramp and lock balls into the Turbo Boost, then make a quick in-and-out in the Pit to start two-ball multiball.

Indianapolis 500 was released during the decline of arcade pinball in The '90s, and has the ignoble distinction of being Bally's worst-selling game of 1995, selling just short of 2,250 tables. Pinheads consider this a tragedy, as the consensus is that Indy is a terrific table and arguably Dennis Nordman's best — the addictive action is fast and furious, the lighthearted humor, commentary, and animation are spot-on, and the artwork and music compliment the game perfectly, making it an overlooked gem of the era.

A digital version was once available as part of FarSight Studios' The Pinball Arcade before their license to all Williams and Bally tables expired on July 1, 2018.