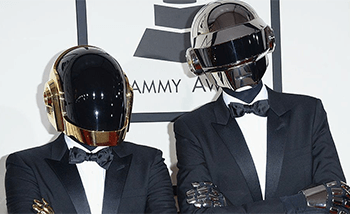 You may know them, but do you know them?
Advertisement:

A music band that doesn't advertise the identities of its musicians. How far this goes can vary: Some bands will just use pseudonyms in the album liner notes, but make no effort to disguise themselves in music videos or live shows. Other bands will be complete Reclusive Artists who hide their faces at every live show and only answer to obvious stage names. For the purposes of this trope, either extreme (or anything in between) counts.

Reasons for doing this may vary. Some artists do it to keep their musical career and private life completely separate. Others may do it because they want listeners to focus on the music itself, not the person performing it (especially when an already-established musician wants a new album to be judged on its own merits and not in comparison to to prior albums). In the latter case, the strategy almost always backfires: thanks to the Streisand Effect, fans will become obsessed with uncovering the musicians' real identity, and may completely ignore the music itself.

Not to be confused with a Fake Band. In a Fake Band, an anonymous (and often-rotating) group of studio musicians provide the music, while a set of actors or cartoon characters provides the public face. In an Anonymous Band, the band's public face are the people making the music—they just won't tell you their names.

Compare The Invisible Band, which takes this trope to the next level. See also Secret Identity.