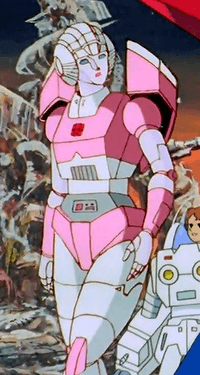 "These are the latest model in android-replication technology. Lethal, efficient, brutal. No man can resist their charm."
— Frau Farbissina, Austin Powers: International Man of Mystery
Advertisement:

In a story where sentient robots are commonplace, some of those robots are designed to look feminine. This tends to include Robot Hair, sleeker, curvier bodies and bumps on the chest, as well as possible makeup-like patterns on the face. Other Tertiary Sexual Characteristics may also be present, especially being colored pink or other pastel colors.

Differs from a Robot Girl in that a robot girl is basically a girl who happens to be a robot, while a Fembot is a robot who happens to be a girl. While robot girls always look human with the possible exceptions of antennae or metal joints, fembots are unmistakably robotic. Their body is protected by sheets of metal or plastic plating as opposed to the robot girl's synthetic skin. Where there should be hair is often replaced with a hairdo shaped head casing. At times, should the fembot not be designed to wear human clothes, their torso would often sport components that would resemble feminine clothing such as hip mounted boosters that resembles a skirt. Their faces would often not be as articulate and human-like as a robot girl's even to the point that it's just a static mask. Other times it's completely inhuman such as cameras and televisions for heads.

Fembots also encompasses the mecha genre as well as some mechs look like gigantic metal women. This is especially prevalent in the Super Robot Genre as writers and designers are free to design mechas as out there as they can imagine due to the nature of the genre that they're working on. Feminine mechs have appeared in some Real Robot Genre stories before but it's quite a rarity. Often it's backed up by an in-universe scientific explanation as to why it was designed in that particular way to preserve the gritty realism the genre is known for. Sometimes it's explained away as just a mere coincidence that the mecha resembled a woman a la Pareidolia.

It may not make too much sense when robots in a given universe lack certain "functions" or if the robot is male while in construction.

Fembots tend to be rarer in fiction, simply because it's easier to design a robotic character that doesn't look distinctly feminine than one that does. It's not enough to add Tertiary Sexual Characteristics or a Breast Plate. The obvious question is "why", when robots don't reproduce sexually; but one can also say "Why not?" and further "why are genderless machines lumped in with males by default anyway?" When this trope applies to Humongous Mecha instead of robot, they are almost always piloted by girls.

The name comes from 1976's The Bionic Woman, though the fembots in those were robot girls. If you're interested, the technical term for these bots is "gynoid"; same root as "android", but "andro" means man (in the sense of a male human) while "gyno" means woman (obviously).

When a Fembot meets a male robot, Robo Romance might ensue. Compare Sex Bot when a robot is designed as a sexual toy.

Frustrated by his latest defeat, Skeletor returns to Snake Mountain to retake control over his wayward minions, who have formed a machine worshipping cult in his long absence. It does not go how he expects...

Frustrated by his latest defeat, Skeletor returns to Snake Mountain to retake control over his wayward minions, who have formed a machine worshipping cult in his long absence. It does not go how he expects...