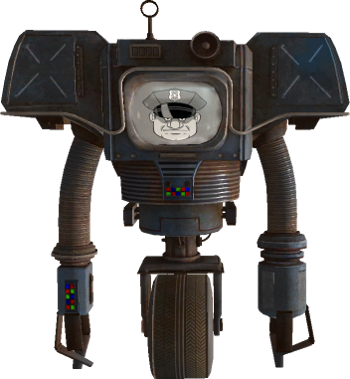 Exactly What It Says on the Tin. An automaton, robot or droid with a television set for a head.

Say the technology for synthetic skin has not yet been perfected and you want to avoid the Uncanny Valley. Maybe you don't have much but some spare parts, dwindling funds and a TV at your disposal. Maybe it just looks cool. For whatever reason, this is a robot or other sentient being with a monitor onto which they project images or outright words that are often snarky responses to people interacting with them.

Not to be confused with a sentient AI or a talking computer. This strictly applies to walking automatons.

Often speaks through a variant of Talking with Signs. Compare/contrast Surveillance Drone and The Blank. See also Screens Are Cameras, if they possess the television face, but no discernible sensory equipment with which to actually see.