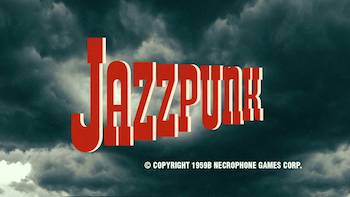 Jazzpunks are GO!
"Adult Swim Games picked it up. That kind of explains it."
— Jim Sterling
Advertisement:

Come in, Polyblank. Here, have a seat.

*sits down on whoopee cushion*

Now, we want you to take on the task of describing this electronic first-person game by the name of Jazzpunk. Intel describes it as a first-person comedy Environmental Narrative Game that came to Windows and OS X-enabled computer entertainment devices via Steam and GoG on February 7th 2014 by way of a two-man Canadian developer by the name of Necrophone Games. A Linux port followed, and in 2016 a "Director's Cut" featuring a greatly-expanded second level and the occasional extra gag here and there besides, was released for the PlayStation 4, appearing as a free update to the PC versions in 2017.

The game itself takes place in an alternate-history version of the Cold War, featuring an assortment of Cyberpunk tropes and bizarre references, all of which are Played for Laughs. I guess you could argue, Polyblank, that this game is built entirely around Rule of Funny.

The whole point of the game is that you're dropped into a certain area and given a simple mission to complete, but the player can wander around the level and find all the quirky references and various assorted bizarre things all over the level in their own time.

That's all we know. What we want you to do is venture into this game, and gather all examples of various tropes from within its electronic landscape. Here's your standard prescription of Missionoyl. If you need me, I'll be in the wine cellar.

Inspecting with one of the microscopes allows you to play Phage Infectors, a bacteria-themed Space Invaders parody.

Inspecting with one of the microscopes allows you to play Phage Infectors, a bacteria-themed Space Invaders parody.