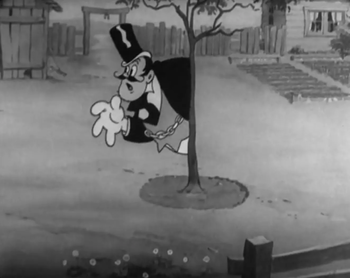 ...seven feet of grinning, snarly beast leaps from behind the two-foot-wide tree. Lions really are sneaky bastards like that.
— Improbable Island
Advertisement:

The ability of animated characters to hide behind items clearly smaller than they are, be it a tree, a lamp post or a drawing pin. Perhaps they disappear into hammerspace?

Sometimes two characters will lurk behind the same narrow object, clearly unable to see each other back there. Frequently the front end of one will emerge from one side, while the rear end of the second waggles out the other side. Or both front ends will emerge, spot one another, and resume the Chase Scene.

Tree Cover is a related trope, done seriously, and generally at least plausibly (courtesy of a nice thick tree).

Not to be confused with Driving Stick.