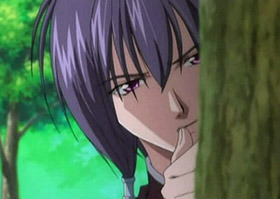 In fiction, if a character has to spy on another for any reason, the go-to hiding place is behind the nearest plant life. Despite all probability, there will always be a sizable tree in a convenient location that the character can use at leisure to eavesdrop or gaze on the unfolding scene. The majority of the time the tree will do the trick and the spied-upon characters are none the wiser about the suspicious person periodically peeking their head around the nearest shrubbery unless Rule of Funny applies in the onlooker being caught. This trope is very prominent in cartoons, where characters often hide behind trees that are thinner than they are.

Not so much Truth in Television, given the many practical limitations.

For instances when the onlooker brings a fake tree as a screen with them, it's Mobile Shrubbery. Occasionally utilized by a naked person trapped outside, for obvious reasons. Differs from Behind the Black in that the characters aren't invisible, just well hidden in an unlikely place. See also Behind a Stick for comic variants.

Alternative Title(s): Hiding Behind A Tree